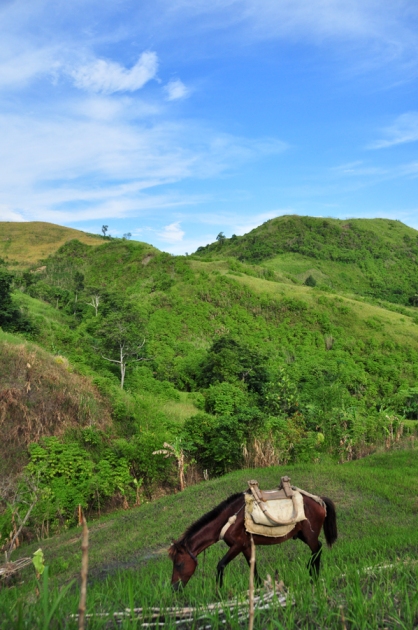 I’VE had this fear of horses throughout a major portion of my childhood and adult life; after being bitten by one when I was in sixth grade. Yes, bitten.

Our neighbor had a horse; just your regular Pinoy workhorse, and not those giant Arabians. It would be tied on the grassy empty lot in front of our house in Lower Rapnaga, Bago Aplaya every afternoon.

Thus, every afternoon upon arriving from school, I’d run to the empty lot and talk with the horse.

One such afternoon, I was caressing the horse’s ear when it snapped at some insect hovering around it. But the insect being an insect, it flew away fast, and guess what got caught in the horse’s giant mouth? My right thigh. Lucky I was wearing a denim skirt, the teeth did not tear through my skin. But it left a huge oval, mouth-shaped bruise that I carried for days on end. And yes, it hurt.  I limped for days, while trying to appear a-okay in front of my mom, for how can you explain being bitten by a horse to your mom?

From them on, all I saw in horses are their big teeth. I stayed far, far away from them. The closest I went to a horse was for the picture-taking at Burnham Park during our class excursion, where each of us sat on one cute dressed up white horse and had our photos taken as if we rode it. Of course, we ended up with the same horse for show. Not believable. I still kept my distance from horses after that one souvenir shot.

Except that… in the Philippines, where public infrastructure are as bad as governance, farm to market roads do not really reach the farms. The farmers instead have horses to bring them to where the public road ends. 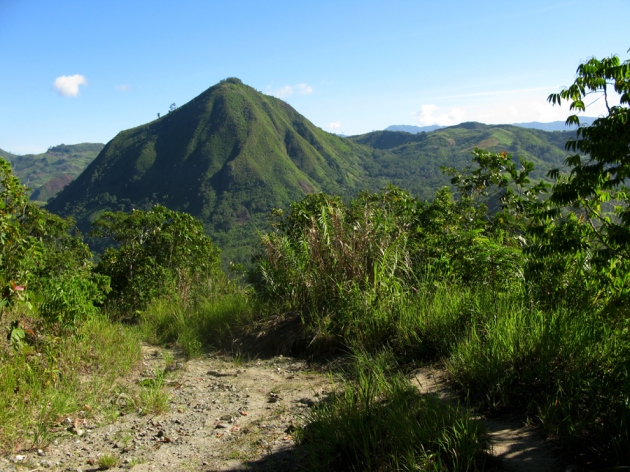 This is Mondo Hill in Marilog District, Davao City, This is the landmark of the Matigsalug tribe territory.

Over three decades since being bitten by a horse, there was but me, my aching feet, a long mountain trek home, and a horse.

It was a three-kilometer walk from the highway at sitio Balite in barangay Marilog, Marilog District and it was the height of the El Nino on April 12, 2008. The soil on the mountain trail was so dry, pebbles would slide down once you dislodge them with your feet. Thus, most of the walk down was more like stepping on the brakes with your feet. The end of the “main” road was a “shortcut”, which was a steep slid down a hill, which required stronger “brake”. By the time we arrived, my leg muscles were so sore from all the skidding and sliding and braking, I could barely lift them much less walk on them. But we were supposed to walk back the same three-kilometer route, and so I mounted a horse. No, make that, crawl up a darn full-grown stallion. Remember, the first and last time I was on a horse was to have my photo taken on a very tame, cute little mare with a cute little saddle with a pair of cute little stirrups at Burnham Park, which was not even moving. Now I was expected to ride a horse that had a wooden saddle and does not have a stirrup. Oh gee.

I was drenched in sweat by the time I was able to settle safely on the wooden saddle. 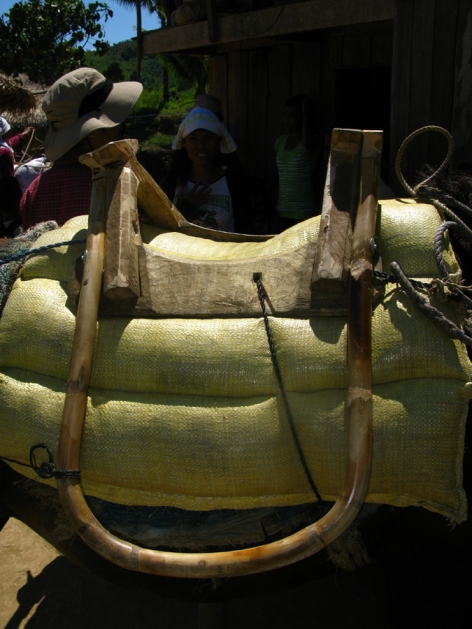 This is how the wooden saddle looks. A cushion made of sack is placed beneath so that the brace will not hurt the horse, and then you sit on something that is all solid wood with no stirrups to rest your feet in, just a rattan brace to help you mount.

The stallion too was a hot one. It’d rear its head and neigh out loud whenever other horses pass by and becomes really restless when the approaching horse is a mare. And while its master walked alongside, he cannot do so all the time as these are mountain trails that sometimes are too narrow there is only enough space for either a horse or a man. 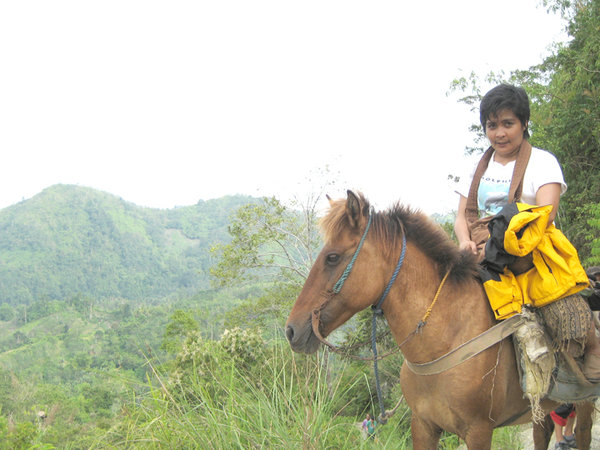 Me, after successfully mounting the horse for my first ever horse ride.

Now here’s something about horses who live in mountain villages… they love to walk on high places. High places meaning where they get a view of the land below. Land below meaning the sprawling vastness down those cliffs. Down those cliffs meaning, those darn horses love walking on cliff edges. The horse owner Diego says it’s because it loves to catch the breeze.

The saddle too would slide towards the right whenever the horse prances downhill. From sheer desperation I learned how to fix the saddle while mounted on a horse prancing downhill. It’s either that or fall. 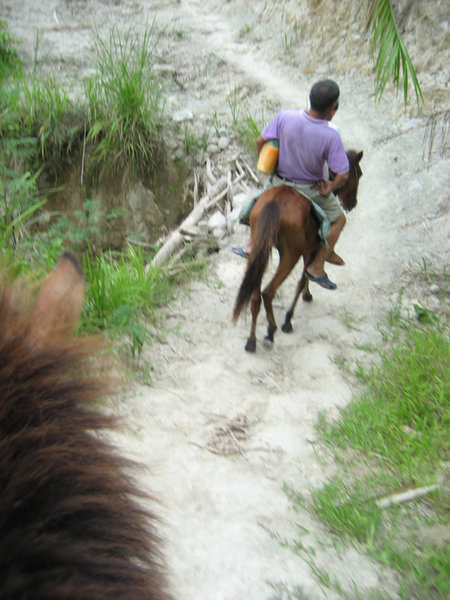 Ever been told that you’d be sore between your legs on your first horseride? Not when you’re up there. The sore between your legs is nothing compared to the muscle pains in our abs and lower back, as you’re forced to make crunches and sit-ups while the horse huffs and puffs and skidaddles up and down the mountain trail; and yes, the bruise on the bone part of your tush where which is exactly where the mainframe of the wooden saddle. 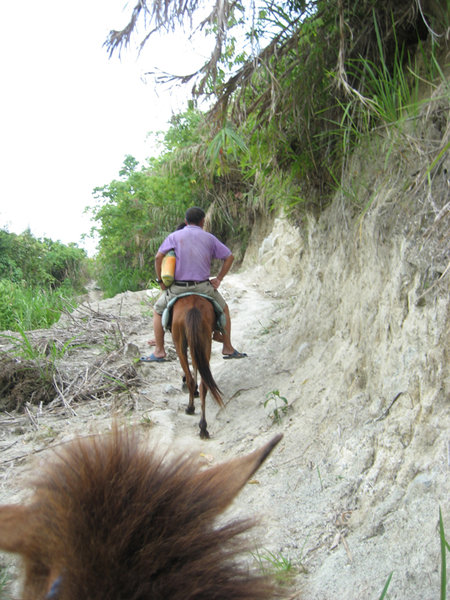 Up and down the horses go…

Suffice it to say, I’ve since enjoyed these horse rides and learned to appreciate the view down the cliff as horses do, until I chose to ride a carabao. Now that is another long story that ends with getting to know what cervical spondylosis means… And I’m telling you, cervical spondylosis is something you do not want to be acquainted with.