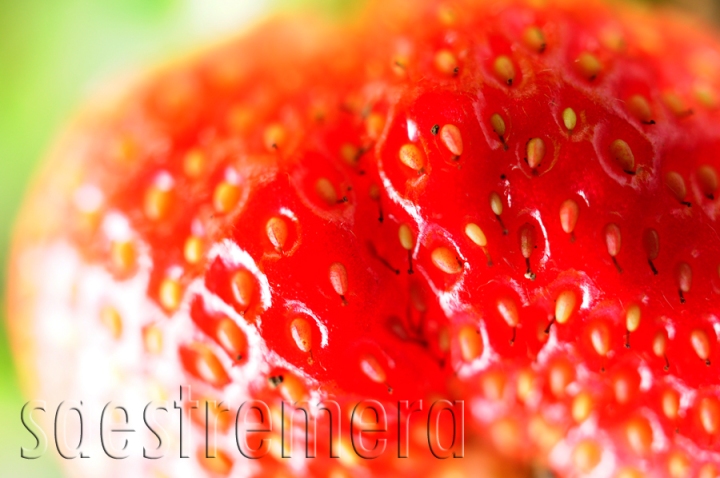 THE real Dabawenyos know about this place — the cold territories of the city with elevations rising higher than 1,200 meters above sea level (masl). A temperate region, as Fr. Franco Uras describes it, and he should know.

Fr. Uras is an Italian Salesians of Don Bosco (SDB) priest. Him with a quirky humor who says the SDB after his name means “source of dirty business”, and has found a place right at the boundary of Davao City to tend a farm and process food to raise funds for children of indigenous peoples in the area. His farm has all the herbs that make Italian dishes aromatic and yummy – basil, dill, oregano, fennel, tarragon, rosemary, name it. It’s there. And more. He also has an olive tree growing, a real laurel tree, stevia (or magic berry),  and two other fruiting trees I am not familiar with – nespulo, which he makes into a wine, and berries that sounded like nirpo (but which I can’t find in the internet).

For decades now, strawberries were being planted there by local farmers. But because of sheer lack of access to proper planting materials, the strawberries they’ve been cultivating were very small and… VERY SOUR. Thus, these were only good for jam. Although locals would still “advertise” their product as shown in this photo which I took around 2004.

That was almost a decade ago, and now the city has an officer in charge in the city agriculturist’s office, Leo Avila, who is excited about the prospects of the lush and green Marilog district and has been gathering farm cooperatives to venture into high value crops, among them, the Benguet varieties of strawberries: Harvest and Sweet Charlie.

A model farm has already been established by the Baganihan Agri-Ventures Cooperative in barangay Baganihan, Marilog District, and the farmers have had their first harvest, albeit at yet an experimental volume. We got to visit it last February 21 and had a fun time with words on our way there.

Me: Gusto ko kasing kunan (I want to take photos of them).

To which Kuya Idoy a radio personality butted in, “Ako gusto kong kunin (Me, I want to get one).”

And turning to Ruby at the back of the vehicle, Kuya Idoy asked, “Ikaw? Gusto mong ka’nin [shortened for kainin] (You want to eat one)?” 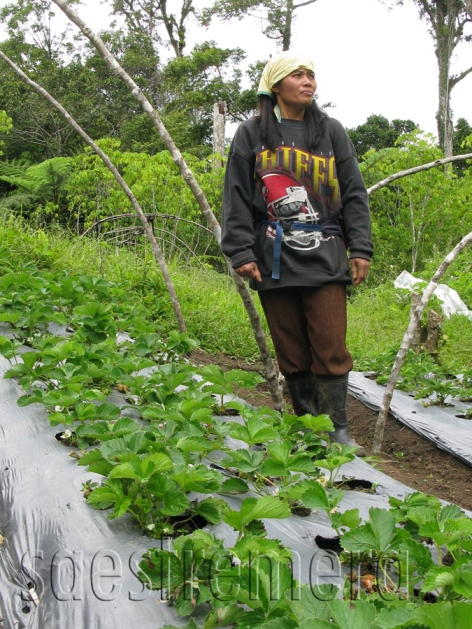 The farm is being manned by Criselda Iroy, who said, no one among the members have taken up interest on the experiment and that she has been farming anyway and so she took on the task. Apparently, the prospect of having luscious plump strawberries as a farm produce has not yet excited the other members, but just wait… with berries as plump and red as these what are out there in that farm cooperative, the city can easily go ga-ga over strawberries the way we are with durian. Kunan. Kunin. Kainin. Whichever, it’s up there for the taking. 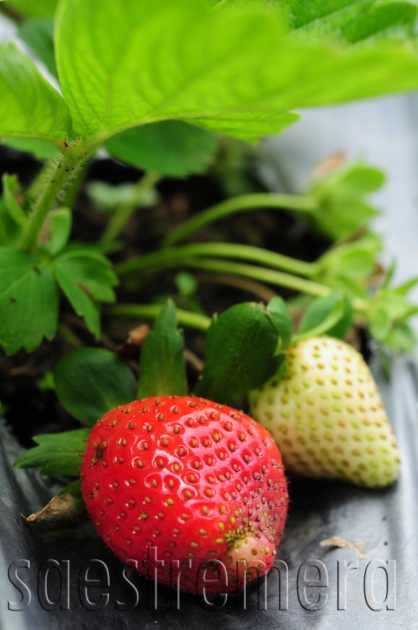