Like Cateel, Baganga is also an old town, thus there were still a few old wooden houses there, pre-Pablo. Not anymore. From Bislig, where we were assured of concrete and landslide-free road, Baganga is around three hours and 20 minutes father down south through the eastern seaboards of Southeastern Mindanao. A total of 410 km from Davao City via Agusan del Sur and Surigao del Sur. 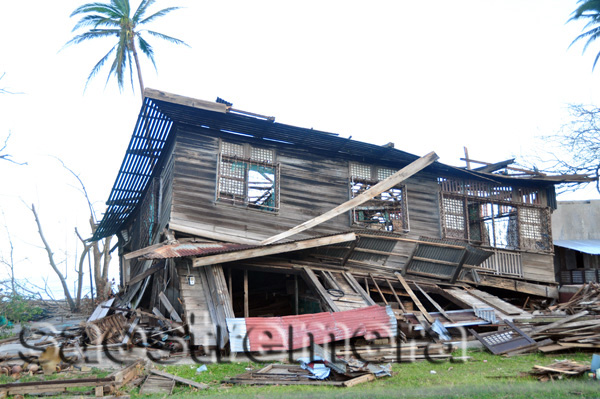 But this is all you can find.

Houses twisted and turned and tumbled. A repetition of what we have witnessed in Cateel.

My fascination for old houses held me enthralled as I stared at the grilles and capiz shell windows of this house in the outer fringes of Baganga.

As we drew nearer the town center, the destruction became more apparent. Although the broken coconut trees and bald agricultural lands were the same.

The bridge that connects the outer fringes to the town center is like a scene from the movies where you are first given a glimpse of what could be, but could not really behold what lies beyond the hump. The bald mountains, and the broken telecom towers, however, will serve as warning to the more observant.

Yes, there are actually two telecom towers on that hill. There is the Smart that remains standing but is already stripped of its satellite plates. And a nearly decimated Globe tower right beside it (it’s the short but wide stump right behind the lamppost on the bridge.

After the hump… the scene.

A scene that stretches on past the business district. 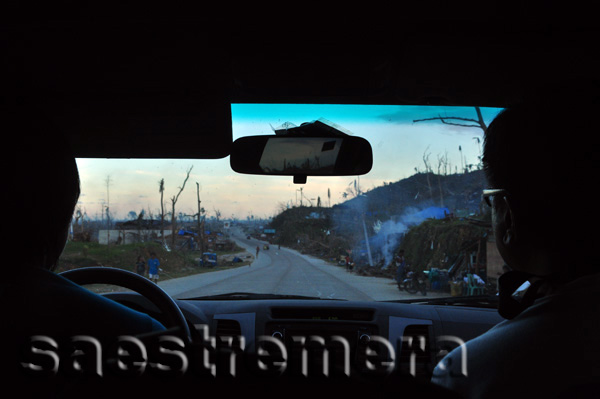 The scene of twisted metals remain, this must have been the municipal gym. 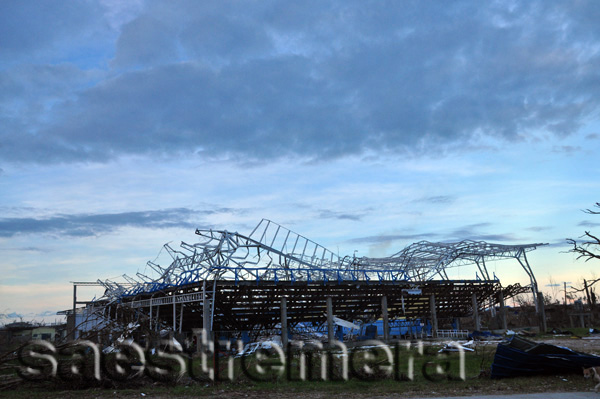 While nothing much remains of a Shell gas station. 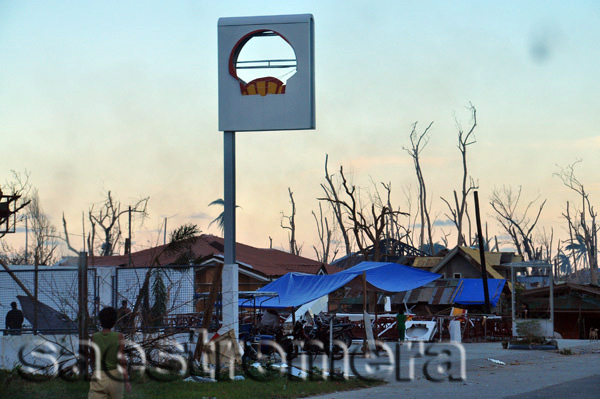 But unlike the other gas stations we saw, this one was distinct… because the posts holding up the roof did not survive and crushed the gas pump beneath it.

From the car window, another old house.

Just before we arrived inside the compound of the Department of Public Works and Highways where the provincial relief operations center is based and where the TSF will be setting up their calling center.

The Red Cross tent and vehicle near another pile of twisted metals paint a picture of conflict, as if there’s war instead of the destruction by a storm.

The government buildings were not spared, their roofs ripped off as well. While a mango tree looks forlorn without leaves.

The Red Cross had already set up a congee line where people get something to fill their tummies at the entrance of the compound. 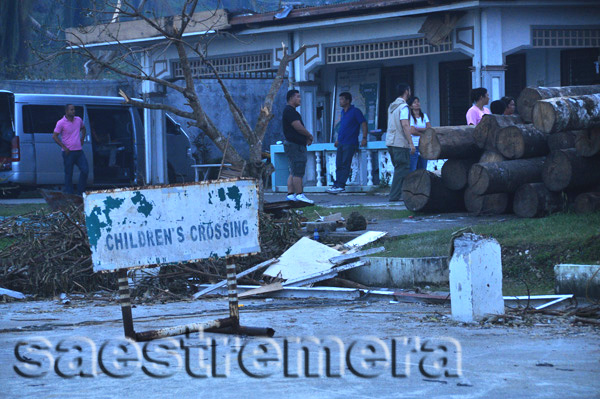 Inside, offices are converted into different operations centers.

We found Davao Oriental Gov. Cora Malanyaon beside one of those buildings and my companions explained why the TSF is in town. It took a while before it sank in that the group promises emergency communication equipment, which opened the door for everyone. Choose your wild, set up where you want.

And so they got this black trolley bag…

Put a white cloth on an extra table outside a building…

… which from the streamer outside indicated it could once have been the police station. 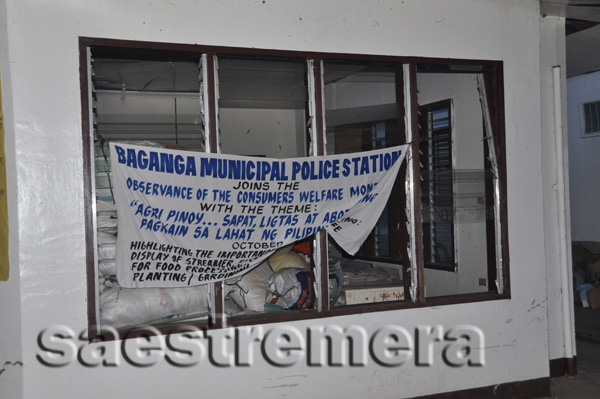 By the way, don’t think the offices can be used. They are actually full of debris. This is how it looks inside the police station. I saw similar debris in the social welfare office nearer the compound entrance.

Back to the TSF crew, after bringing in their trolley bag, they brought out their units and waited for a signal. 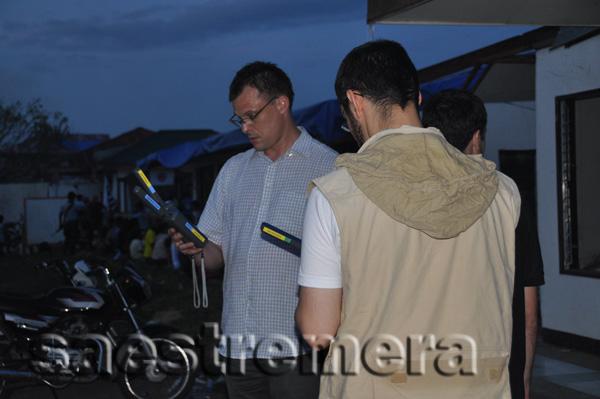 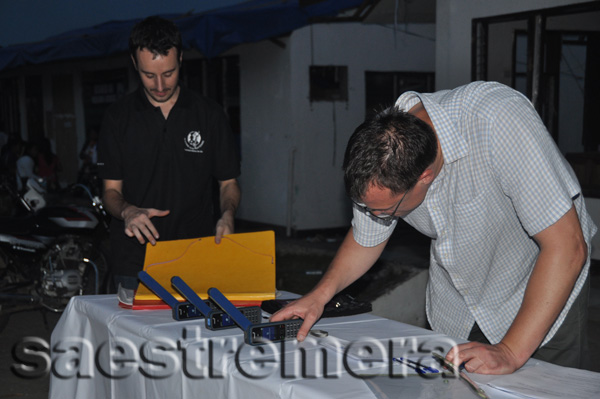 And then they were all set. Satellite phones in a row, waiting to be used by very eager relief workers who have not been in touch with their families and bosses for the past several days.

The Smart Communication executives made the pilot call, to their boss in Manila to inform him that yes, the calling center is now officially operational.

Word quickly spread and relief workers started lining up to get first crack at reaching out to their families and colleagues who have no idea how they are doing since they arrived. 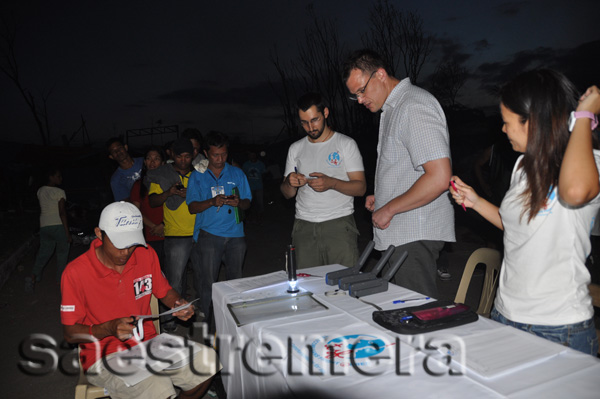 First in line was Benny Aquino, a worker of the Department of Social Works and Development, who placed a call to his boss in Davao City. 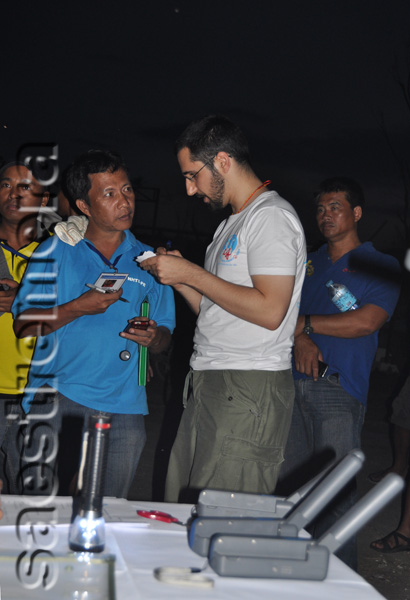 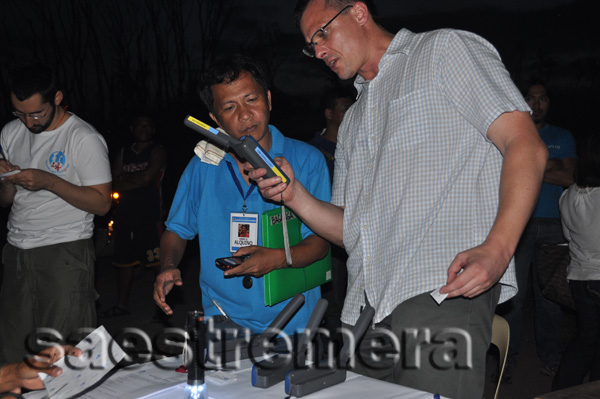 Soon after, the other units were put into use. There’s one problem, however, that’s slowing them down… visibility. It was already dark and the crew could hardly read the phone numbers. 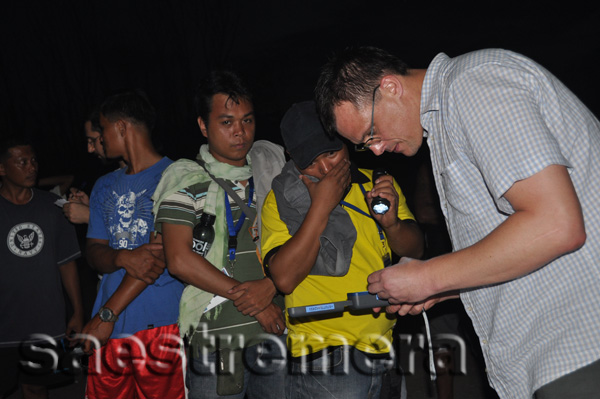 All they have is a flashlight to light up their operation. Remember I’m using flash. 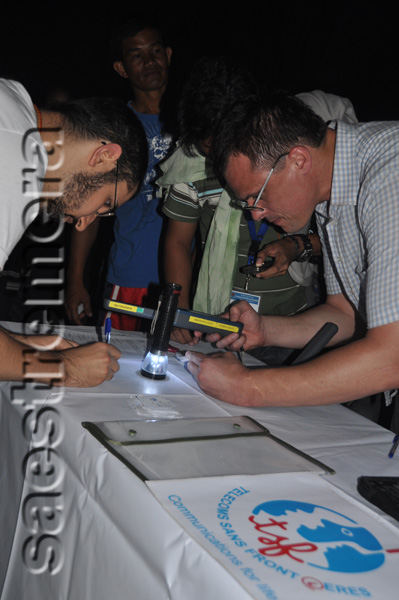 But this is how it looks when I turn off the flash.

We had to leave on the same night and all along the more than 90 kilometers of concrete road back to Bislig, this is all that we see. Reflectorized chevron signs that light up as we approach.

Another day has ended…